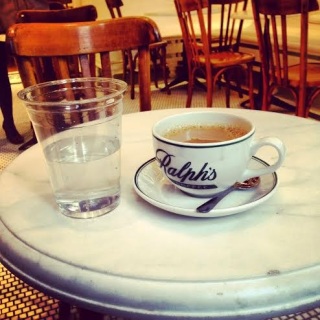 Post breakfast at the wonderful and breathtaking St Regis, I ended up outside Ralph’s Coffee Shop. It had started snowing. It was my second last day in New York, slightly melancholic yet refreshed with all the wonderful experiences I’d had so far in this city; I needed some shelter as I was getting snowed under (like literally!). So I knocked on the doors of Ralph Lauren Fifth Avenue at 9:58 am. It was still 2 minutes to go till they opened but they came rushing towards me as if they knew I needed a roof above my head. I politely asked ‘Are you open? I was hoping if I could just go to the cafe above?’

I led myself upstairs – and there it was – the gem of a coffee place overlooking fifth avenue, still adorned with Christmas decorations and a welcoming staff! I had never heard of Ralph Lauren’s cafe till I had reached New York. Yes, they are brewing their own branded coffee, branded cups and a chic branded cafe. Being in New York made me appreciate the tall black American style coffee as long as I was getting half and half with it (another addiction which I can’t seem to find in London?). Somehow the taste of plain coffee was growing on me. I didn’t want the latte everytime.

I enjoyed my cup of coffee looking over fifth avenue wondering when I would be back again – yet tried to seize the moment. The view was magical! 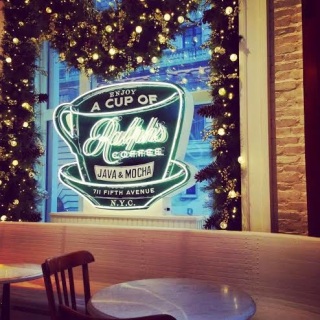